Another batch gone to test loft

We were going to sell a round but at the last minute I changed my mind and decided to put another 12 in our test of Mr & Mrs A.Winder. We have kept 3 nest mates of the ones sent to Alan and these will form part of our entries to the Derby Arona. I delivered the birds to Alan today. I had the pleasure of seeing how the birds he has had from us so far have developed since they arrived with him. He has 5 in his race team and 14 in his second round team. He is being slammed by the hawk and 3 have been killed in the later breds which is a shame. These 12 will supplement this second team and 25 will be a nice number to work with. Hopefully these can catch the comeback races this season which will set them up nicely for next year. Breeding is coming to end now at the lofts with a handful still on eggs which will be hatched out and the youngsters will go to the Derby Arona race. I am undecided as to how many to send as yet so we will have to see what happens with that. 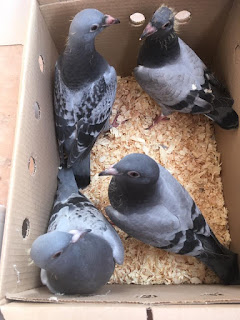 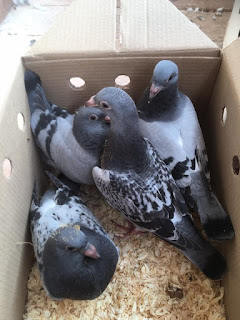 Rasbull Lofts have once again put our money down and secured 3 new additions for our stock loft. We have secured 3 birds direct from Belgium...